“Angelus Novus” Foundation for the study of Arts, History and Thought

The Foundation is configured as a non-profit organization that aims to become a center for studies and debates of an international vocation interested in the dissemination, promotion and understanding of the figure and work of Walter Benjamin and of thought contemporary, a center devoted to research in arts and humanities, promoter and defender of ethical values and modernity, of European identity and of the culture of peace in today’s society, a space that, from the culture, vindicates historical memory , democratic values, human rights and have Portbou as a historic place of frontier and exile that contributes to the promotion of its historical and cultural heritage and landscape.

The building: historical and architectural values
The building in History

The building of the old Town Hall of Portbou is a historic building that was born as a municipal school at the beginning of the 20 century and that, together with the Congesta Theater Hall, next to it and Casa Ca l’Herrero, a hundred meters, today a civic centre, constitutes the central and historical centre that remains of Portbou. At the moment, it is the only historical building that was born with a public nature that remains standing up to the population and that has been a witness to the historical memory of this population.

Located on Avenida de Barcelona, ​​between Méndez Núñez street and Pujada del Mirador, about fifty meters from the beach, it is located at the base of the mountain of the cemetery, or Punta del Caixol and one is almost obliged to climb on foot to the Memorial “Passages”, dedicated to Walter Benjamin and performed by Dani Karavan, today Cultural entity of National Interest (BCIN 2018).

The school’s pavilions or arcs are built in a stone typical of the Alt Empordà area, a traditional architecture that uses the walls of local stone walls, that some organizations linked to the recovery of dry stone buildings begin to claim for their anthropological values. 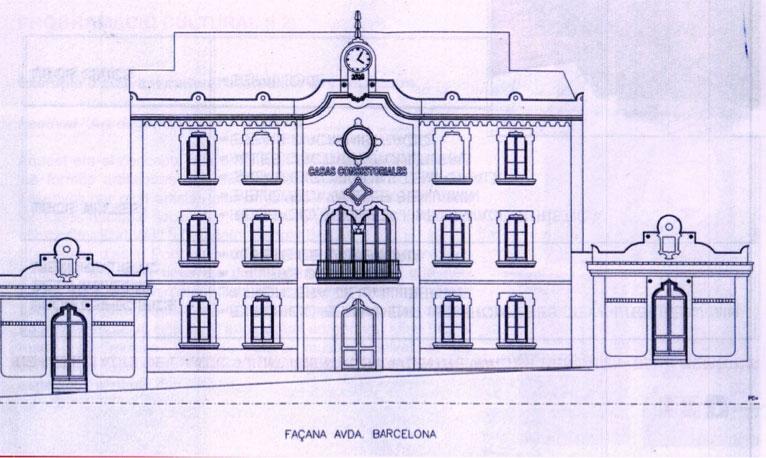 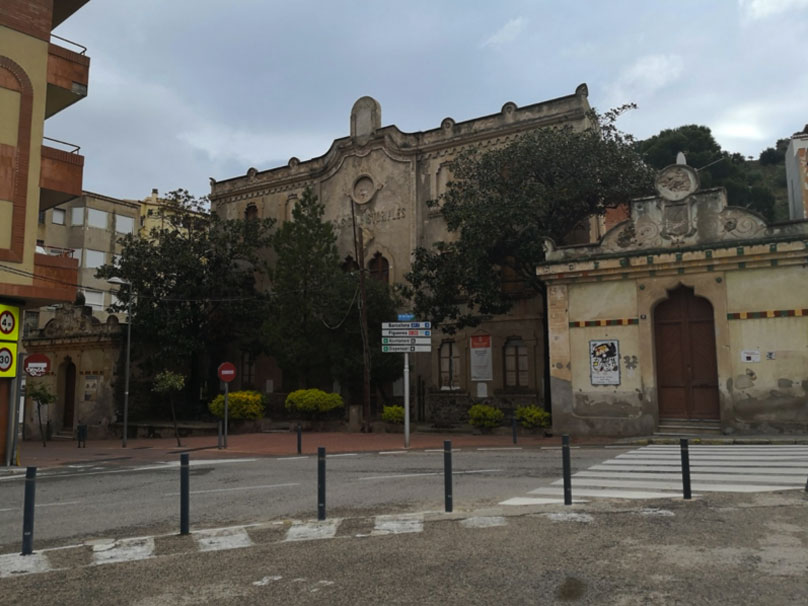 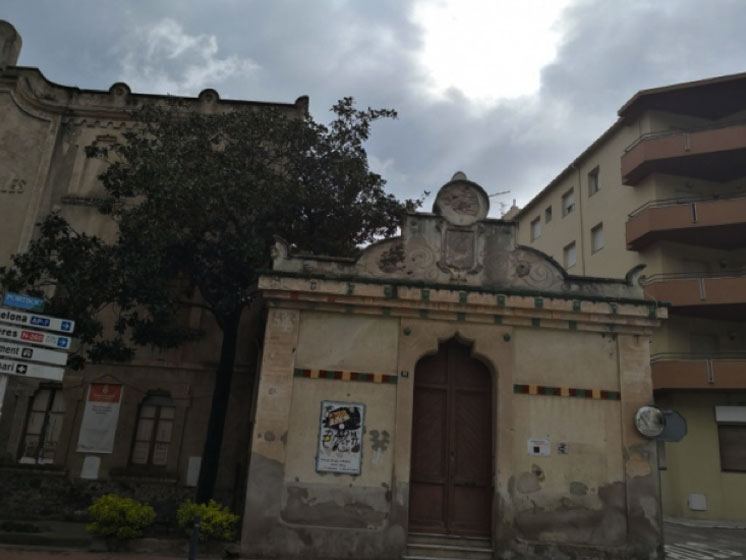 The building: Walter Benjamin House, in Portbou. New cultural use

The project of Casa Walter Benjamin in this building has its history. Since the inauguration of the Memorial Passages of Dani Karavan in 1994, which promised to the population of Portbou the creation of a space, from a centre dedicated to Walter Benjamin, to its memory and world reference point the illustrious thinker that contributes most of the international tourism to the population, has been difficult to raise the project because it needs a broader territorial fit, with the support of other institutions and articulated with others projects in the area.

It is one of the few emblematic buildings in the history of the town of Portbou that remains standing and that the City Council of Portbou wants to promote as a cultural use to welcome the recent donation of the Walter Benjamin International Library by Mr. Gian-Luigi Ponzano at the “Angelus Novus” Foundation for the study of Arts, History and Thought, created in Portbou to promote the project of Casa Walter Benjamin next to the Town Hall.

The Walter Benjamin House project in Portbou, in the building of the Old Town Hall of the population, wants to be a center for studies and debates of an international vocation interested in the dissemination, promotion and understanding of the figure and the work of Walter Benjamin and contemporary thought, a centre devoted to research in arts and humanity, promoter and defender of ethical values and modernity, European identity and the culture of peace in today’s society, a space that, from the culture I vindicate historical memory, democratic values, human rights and have Portbou as a historical site dedicated to memory, the border and exile, which contributes to the promotion of its historical, cultural and landscape heritage.

In this Building, the library will be a good place for visitors who seek the memory of Walter Benjamin in Portbou through documents and also, the meeting point of the Walter Benjamin literary path in Portbou, following the steps of the philosopher as well as other intellectuals.

Through the installation of the library in this building, Portbou brings out the immaterial heritage of Walter Benjamin’s journey and stands as a reference point in the history of human rights in Catalan, European and universal history. At the same time, it is a recognition of men and women, among them many intellectuals, who fled European fascism to fight for democracy and freedom.

The building wants to host the Walter Benjamin Library and have an exhibition space explaining the relationship and passage of Walter Benjamin for the population of Portbou, as well as explaining the Memorial Passages of the Israeli sculptor Dani Karavan, with documentary material and visual, as well as a temporary space of exhibitions that allows to analyze aspects of his work and philosophy and bring together entities that come together in the figure of Walter Benjamin: Walter Benjamin Chair in Girona; Mume, La Jonquera; The suitcase of Portbou magazine; Amical de Mathausen; Benjamin Archives, Berlin, Zentrum für Literatur und Sozialförschung Berlin; Musée d’art et d’histoire du Judaïsme, Paris, among others.

The promotion of this project must encourage the transformation of the people of Portbou and the contribution of wealth to this border area, an investment that must contribute to self esteem to its citizens and push the updating of its structures .

The House of Walter Benjamin must help change the dynamics of the population and return it to cosmopolitanism. It is a territorial conquest necessary to promote the whole territory of Girona to its natural geographic extremity.

The presence of Dani Karavan once again in Portbou in 2014 put the Walter Benjamin House (The Benjamin House) project to the table, which he personally managed with the architect Norman Foster, destined for rehabilitation. The building of the old Town Hall and former schools of Portbou. The Norman Foster restoration project, which was executed in 2003, included a report, a budget and the support of several specialists at the international level. The project was, and still is, a personal gift that the illustrious architect makes Dani Karavan for which he did not contemplate charging his fees. The town council decided not to take the project forward and recycle it to simpler projects that did not finally succeed, with the consequent disappointment of Dani Karavan and its promoters.

Mr. Luigi-Ponzano (Alexandria, 1929 – Ivrea, Italy, 2018) engineer of the Olivetti company and author of the “marguerita” device, and his wife, Bianca Vittonatto (+), built this library for decades. Lovers of the border lands and Portbou, who knew very well, visited Spain for the first time in 1958. They always had great affection for Portbou and for the Walter Walter Benjamin project.

It is an international library unique to the world that Mr. Gian Luigi Ponzano, Olivetti engineer, inventor of the “daisy” of this typewriter, has given his death for the cause Walter Benjamin. 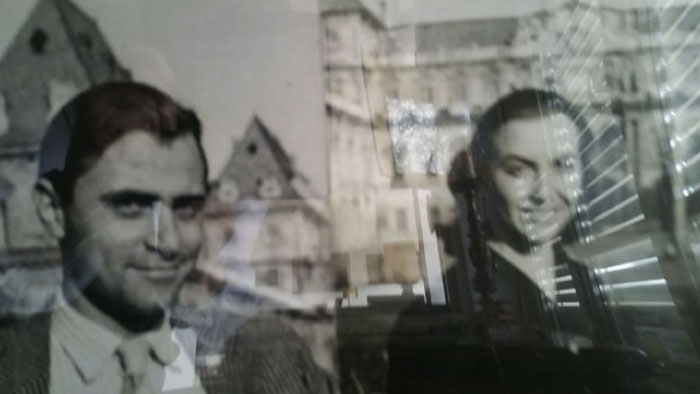 It contains a small part of the file with letters with Lisa Fittko, the guide that helped Benjamin and other intellectuals to pass the Pyrenees to flee in exile. These materials are an active and fundamental nucleus for the start of the Walter Benjamin House.

French literature: Since Mrs’s wife Ponzano was French, the library has a collection of literary authors in this language, from the complete works of Molière and Rousseau, to other authors, such as Flaubert, Valéry, Céline, Cocteau, Aragon, Verlaine, Proust, Barthes, Barrault, Chateaubriand, among others, in an approximate total of 300 books.

Russian Literature: This is a very selected set of Russian literature books: Gogol, Dostoievski, Tolstoy, but also Boris Pasternak, Maiakovski, Chekhov, Gorki, a set of 12 books by Arthur Koestler, close friend of Walter Benjamin and books on Asia Lacis, friend and lover of Walter Benjamin, who introduced him to the changing currents of revolutionary Russia of the 1920s. The set brings together about 275 books.

History of Russia twentieth century: Other books discuss the evolution of politics in Russia with Stalinism, European Communism, the history of the CPSU, Trotsky, Khruschev, the Cold War. The set covers about 350 books.

Islam and the Jewish world: Add topics related to the Islamic and Jewish world around about 100 books.

Art and History of Art: The concerns of Mr. Ponzano in the field of arts and design, as an engineer who has been for 40 years of the Olivetti firm, has led him to dedicate a part of his library to art, with several monographic books, 20th century art by authors such as Max Ernst, Paul Klee, Munch, but also catalogs of relevant exhibitions and now exhausted such as Paris-Paris, Paris-Moscow or Paris-Berlin. The art library contains some classics and the approximate total number is about 400 books.

Spanish civil war: This is one of the areas, besides Walter Benjamin, best equipped with the library of Mr. Ponzano, with old and modern books, an updated library of the most violent themes of the Civil War in Spain, 1936-1939. The books are mostly in Spanish, French and Italian. The Memories of Salvador de Madariaga, volumes on The Tragic Week, on the figure of Durruti or Dolores Ibarruri stand out. Also stand out the 4 volumes of R. Salas on the History of the Popular Army of the Republic, the volumes of Peirats on the CNT, the History of the POUM, books by Rafael Alberti and Simone Weil, the volumes of the History of the Communist Party of Spain , the book by Gerard Brenan on Storia della Spagna 1874-1936 or the book by Jean Labrunie Mourir à Guernica. There is also a collection of ancient illustrated magazines about the Civil War, such as L’Illustration or foreigners such as Life. The approximate set is about 1200 books.

Complete work by Walter Benjamin, in Italian: 8 volumes; Für Walter Benjamin (AsKI), 2 copies. (exhausted); Pour Walter Benjamin, 1 copies (sold out); Neue Dokumente zum Tode Walter Benjamin (AsKI), 1 copy (exited). Most books in this set are written by Walter Benjamin in several languages, including the 2 correspondence volumes published in French. Also worthy of mention are works by the thinkers of the Frankfurt School, such as Horkheimer and Adorno, as well as works by Hannah Arendt, but also by friends and translators of Benjamin as Franz Hessel. The set also includes works on his thoughts from his closest friends such as Gershom Scholem or Stéphane Mosès and also by more contemporary scholars, such as Agamben, Palmier or Löwyi, among others.The set of this specific library of and about Walter Benjamin is about 160 books.

The whole of the Walter Benjamin Library that Mr. Gian-Luigi Ponzano offers Portbou for the Casa Walter Benjamin project. It is of great interest in the consistency of the selection of books, due to the diversity of languages ​​(French, English, German, Spanish) that allows international consultations and gives a true European dimension of the figure of Walter Benjamin and facilitates his study. In addition, it provides a vision of the historical European context and of the Spanish Civil War that for the history of Portbou is of great interest. The approximate set of books has been roughly calculated and is about 3,108 books. Bearing in mind that the Casa Walter Benjamin project is intended to host residences of researchers, this library is a fundamental stone for establishing a solid knowledge base that allows these researchers to work and is the active nucleus that helps to increase these funds with other possible donations and purchases by the “Angelus Novus” Foundation.

Pilar Parcerisas, on behalf of the Portbou Town Hall, visited Mr. Ponzano in April 2016, who signed the donation, which would be effective at his death, which occurred on September 16, 2018. This fund arrived in Portbou on March 7, 2019 and is in a warehouse from the Portbou Town Hall until it can be installed at the Casa Walter Benjamin, pending the adjustment of part of the building for its installation, which already exists the design of the project of ‘ indoor installation. The cataloging, in accordance with the General Directorate of Archives, Libraries and Museums of the Generalitat, would be made in agreement with the Biblioteca Nacional de Catalunya.